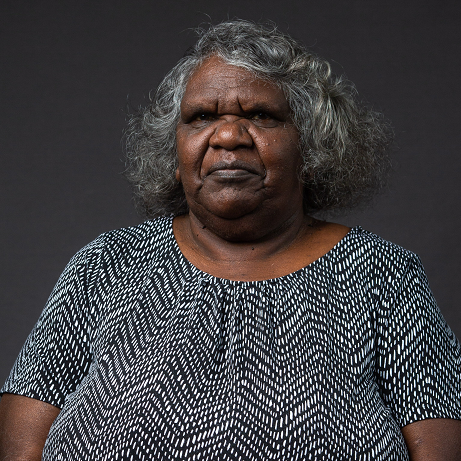 Yanyi was elected as a Chairperson of NPY Women’s Council (2019- 2022).  Yanyi has previously been Chairperson and Vice Chairperson of NPYWC for various terms between 2002 – 2019.   As a part of her position, Yanyi has worked to keep up the pressure on governments to support renal dialysis in the NPY region including in Docker River (NT) and Pukatja (SA) as well as seeking corporate sponsorship for Women’s Only Law and Culture meetings, driven through the Larapinta Extreme Trail Fundraising event.

She has also been an Aboriginal education worker in Anangu schools on the APY Lands and in Adelaide and she is a highly sought after interpreter and bible translator.  A member of the Ernabella Choir, now the Pitjantjatjara Choir from its early days, she has also completed one year of training in Gnowangerup Bible College, WA .  Yanyi attended the Indigenous Governance Awards in Melbourne in 2012 to accept the Awards on behalf of NPYWC.  Yanyi along with a small delegation went to Cape York in 2012 to learn about the Family Responsibility Commission.  More recently, Yanyi has done translation work for RASAC and the Government of South Australia.

Yanyi looks forward to working with the organisation and other Directors over the next two years to make life better for members and their families.