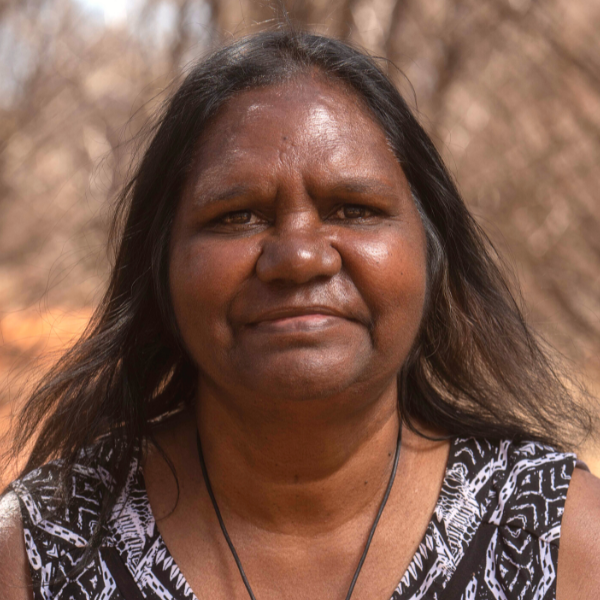 One story that I remember was about the coming of the 20th century, the station manager sat down with my father to tell him which way they were going to communicate – English or in Language. My father decided that we were only going to speak English, which is why I don’t speak my mother or father’s language. They were from Wangkangurru, and the Pitjantjara language. It hurts my heart that we don’t speak language and now everywhere we go across the Tri-State region, everyone in the communities are learning two-way language.

I worked with Nora Ward but I left and put it on hold because I wanted to have children. I have 3 sons and 1 daughter. I separated from my partner and moved to WA for 23 years learning more about culture. I found that the Kimberly Mob are behind but they are teaching two-ways in the schools.

In 2007 I decided to be a Teacher Aid and worked at Warlawarru Catholic School from 2007 to 2015. Then I moved on to another school, Yiramalay Wesley Studio School in the National Park at Fitzroy Crossing. I was doing mentoring and also taught art classes for the local students & those who visited from interstate.

In 2018, I decided to move back to the Northern Territory. I moved to Mutitjulu Community and stayed with my niece Kimberley & my son in law, David. I worked in Yulara at the Ayers Rock Resort in Reception for 2 years. I then moved to Port Augusta and found it difficult to find work, so I moved back to Mutitjulu.

I am currently working casually for Centrelink and helping with translation. My passion is to work with youth & young people in the community. In September 2022, I attended the NPY Women’s Council AGM and decided to put my hand up to join the Board of Directors. From all my experience working in the schools, I am very passionate about young people, especially young girls. I want to be a mentor for girls in community. I want to help build these young girls up to be strong leaders as they are our next generation.

I am so proud that I got elected to represent my community and also represent NPY Women’s Council as a whole. I am so excited to continue learning about what NPY does across the Tri-State.