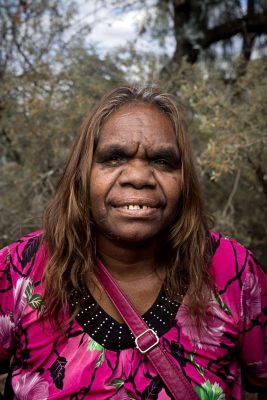 Rene Kulitja is from the Northern Territory community of Mutitjulu and has been elected as a Director of NPY Women’s Council since 2007.

Rene was born in Ernabella, South Australia and grew up in the APY Lands before moving to Docker River.  When Uluṟu-Kata Tjuṯa National Park was handed back to traditional owners in 1985, she moved to Muṯitjulu to work in tourism.  Rene is well known as an artist, she attributes her passion to her parents Walter Pukutiwara, and Topsy Tjulyata, acclaimed wood carvers and founders of Maruku Arts. Her most famous design would be ‘Yananyi Dreaming’, which covers a Qantas Boeing 737. Rene has been a member of both the Muṯitjulu Community Council and the Board of Management of Uluṟu-Kata Tjuṯa National Park. In 2006, she became the chairperson of Maṟuku Arts.

She was a founding director of Walkatjara Arts at Uluru and is chairperson of Maruku Arts Governing Committee. In 2015   she represented Tjanpi Desert Weavers in the 2015 Venice Biennale.

As a community advocate, Rene has campaigned to address the issues of petrol sniffing in Aboriginal communities in central Australia. In 2015, Rene was instrumental in advocating and seeking an increase in Renal Dialysis machines in NPY Communities as well as seeking corporate sponsorship for Women’s Only Law and Culture meetings, driven through the Larapinta Extreme Trail fundraiser.

In recent years, Rene has joined the Central Australian Aboriginal Women’s Choir (CAAWC), as well as performing in central Australia, the choir toured Germany in 2016.