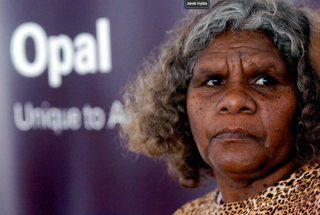 Low Aromatic Fuel 10 Years on and Going Strong: a community-driven solution that has stood the test of time.

This month it is 10 years since Opal fuel first rolled into Alice Springs. This happened on the back of a community campaign and with the support of fuel companies, government and many retailers in the region. It has worked well and 10 years on we have reason to celebrate and highlight this good story.

CAYLUS, WYDAC and NPY Women’s Council are proud of our involvement in this campaign and ongoing work with remote communities to support the roll out of the fuel and other measures for the wellbeing of young people and families. We were not alone in this work, many community leaders took action against sniffing and argued for resources and support that were needed, governments, industry, councils, social service organisations and many concerned individuals all played a role and continue to make regional use of LAF a success.

Blair McFarland CAYLUS Manager stated “Low Aromatic Fuel use has led to a 94% reduction in sniffing in Central Australia. While many new and old challenges persist in the region, this roll out is an example of getting it right, community voices being listened to and community organisations, government and industry collaborating and backing a working strategy over the long term”.

Brett Badger the general manager of WYDAC stated “ 10 years ago, we were worrying about petrol sniffing in the region, kids were getting hurt and sometimes sniffers hurt other people. Board members and staff from WYDAC talked up for using Opal in the region, and especially bringing it in to Alice Springs. We knew from experience in Yuendumu that it is possible to deal with problems like petrol sniffing. Aboriginal organisations worked together to lobby for this and to make it happen and it worked. We need to keep this going but we also need to learn from it about good ways to face other challenges.”

Liza Balmer, Deputy CEO NPY Women’s Council, stated “today is a great opportunity to celebrate a success that we have all achieved together. Sniffing still happens occasionally and can’t be ignored, but it’s not the endemic problem that it once was. A generation of children are now growing up free from sniffing. Unfortunately there is still the legacy of past generations of petrol sniffing and the number of adults with acquired brain injury. And, despite all the evidence, there are still some retailers that do not stock Low Aromatic Fuel, this can be linked to sniffing outbreaks in our region, so there is still some work to do. However, today we want to celebrate the years of persistence and hard work that has led to the roll out of Opal fuel in central Australia and the consequent reduction in the prevalence in petrol sniffing.”

Blair McFarland from CAYLUS stated “with petrol sniffing if we only focused on treatment, case management and other measures that happened once people were chronic sniffers we would still be running around in circles today. There is good evidence to show that we can reduce the levels of crime in our communities through positive measures that take a holistic approach, like good youth programs that empower young people, through using community development approaches, including the right approaches to jobs and education. We hope that this is not missed in the considerations of the Royal Commission.”

A public event to celebrate this milestone will be held tomorrow Oct 27th at the Spinifex Room Double Tree Hilton Alice Springs from 11am. Speakers will include representatives from our three organisations, community leaders who were involved in campaigning for regional use of Opal and Nigel Scullion Minister for Indigenous Affairs.

As a part of the event we will hold the Alice Springs launch of the Monitoring Trends in the Prevalence of Petrol Sniffing in Selected Australian Aboriginal communities 2011-2014: Final Report from the Menzies School of Health Research. It reports an 87.9% reduction in sniffing in the 17 communities sampled. Hard copies of the report will be available and there will be a recorded introduction from one of the authors of the report Professor Peter d’Abbs.