The “Making the Warakurna to Warburton road” story

Lots of families from Warakurna and Warburton came to help make the road, men, women, children and dogs. My dad was one of those men. I was just a young girl. We started at Warburton. The men made the cutline, chopping down trees by hand with axes, and clearing grass. The women made the fire and prepared food and looked after the camp. While the adults worked we would have fun. There were lots of children and dogs running around playing together. A white man came and paid money for the work done. We all stayed out on the road until that road was finished.

Two brothers drove the tractor, taking it in turns. The tractor had a trailer which stored food, 44 gallon drums of diesel, and blankets. We would get lovely clean water from rockholes. Sometimes we would get in the trailer and play. Each day the men would clear a bit more of the road, and we would move on and camp somewhere else, getting closer and closer to Warakurna every day. 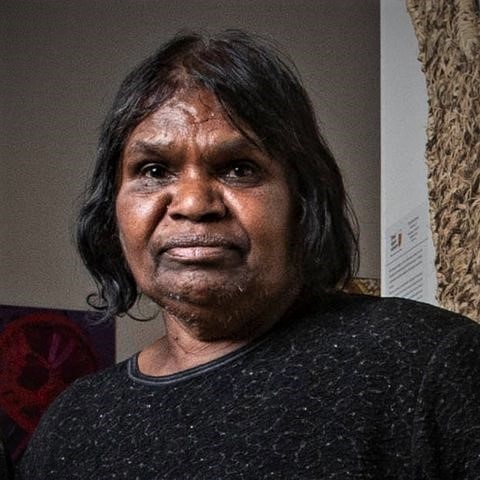 Judith was commissioned by the Art Gallery of Western Australia (AGWA) Stimulus Acquisition Package 2020 to tell this story as a tjanpi sculpture. Titled ‘Making the Warakurna to Warburton Road’  The sculpture was  purchased by AGWA, and will be exhibited at the AGWA Covid 19 Stimulus Art Exhibition scheduled for early May 2021.

Judith was born in the bush at Mitika, near Jameson Community and went to school at the Warburton Mission and later at Docker River. Judith now lives in the remote community of Warakurna, WA.

Judith is an accomplished weaver, making both baskets and fibre sculptures from desert grasses that grow close to her home. Judith is renowned for her flat sculptural works which tell stories of the Ngaanyatjarra Lands, both historical and contemporary; she also uses the animals from her country as inspiration, including camp dogs, birds, goannas, porcupines and rabbits. Ancestral figures also inspire her work, and Judith’s work is very fine and detailed. Judith also paints and is represented by Warakurna Artists.