“……it comes as a shock to them when the police have a warrant for their arrest. This shock comes to both her and him and the family.” Anangu Support Worker 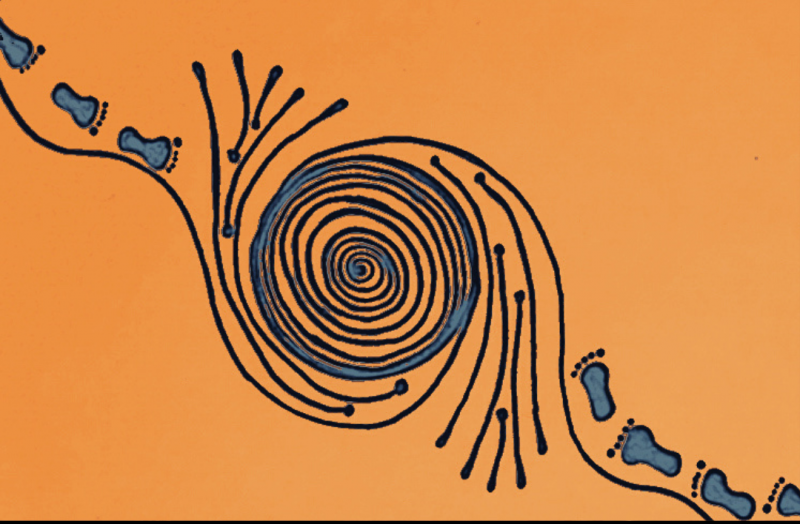 An DFVS Anangu Support Worker talks about her experience: I drew this picture after we were having talks about legal issues. We were trying to get a better understanding of how Anangu think about domestic violence orders (DVOs).

In the Anangu community, they think it’s none of their business when partners have a fight. The fight might start after they have a drink then maybe they start arguing about the money saying things like ‘You spent my money!’ People around think he’s just going mad, they might say: ‘I just heard something happening’, but they don’t do anything.

They don’t know that there are legal things there – the threating and the violence is there and it’s not good for the kids, it’s like trauma is happening for the kids.

A problem here is that people think its ok to leave it [and not do anything] – ‘they are husband and wife – it’s their business – the neighbours think they are married so they don’t need to talk to the police, but sometimes things get worse for months and years. They are hurting the kids and each other. Then they get to the legal stuff the police come in and those things from the past (like a previous DVO/warrant) and they are going to affect you now. They have been saying ‘it doesn’t affect me’, then it comes as a shock to them when the police have a warrant for their arrest. This shock comes to both her and him and the family.

They don’t know how important it is to understand. It is a big thing now they have to know about. It can affect the family and the children. It is affecting the woman and the man. Both need to have a clear picture. It will affect you now and in the future. They can come together in the middle and talk about the DVO and what it means. They need to know that the DVO can help to stop the violence.

The difference came for me last week when we looked at the [Blurred Borders] cards because there’s a story that explains legal and illegal behaviour. I’m ready now if violence comes in. I know what is legal and illegal, I’m thinking about the idea of the narrative therapy metaphor of ‘violence’ [ie a person acting out ‘violence’]. Now there is something to say to it: ‘You are illegal!’

It’s gone from being – the man and woman walking towards each other to sort out the DVO,  to now we have a better understanding so that she can say to him ‘I want you to be my husband and a father to the children but you need to understand the DVO’. In the middle of the picture is about the going to court time, the legal statements, the lawyers, how are we going to fix this? Lots of worries.

Now [with better understanding] the couple are coming together in the middle to sort it out, they come out with release, relief, the mind is open. Learning happens in the middle, they come up thinking about the future. How can the legal story make them a better person? A better parent? A better husband or wife? There can terrible stress in the middle but it can be a positive thing if people understand.

Staff talked at length about threats, power and control, the word ‘psychological’ and emotional harm, which Anagnu staff equated to spiritual harm. These conversations have led to all staff developing a more nuanced exploration of legal/illegal behaviours, and the purpose of a DVO and criminal procedure being to create protection, not trouble.