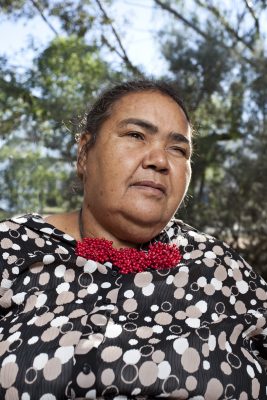 A Yankunytjatjara woman from Imanpa Community, Northern Territory, Margaret has been Deputy Chairperson for NPY Women’s Council since 2017 and was also Deputy Chairperson in 2008, during this term, she was elected to the office of Chairperson until September 2011. She was first elected Director (formally Executive Member) in 2003 and has been elected as a Director on several occasions since then.

A highly regarded spokesperson for the NPY region, she is a former Liaison Officer of Imanpa Arts and Crafts.

In 2000, she was one of 330 Aboriginal women who performed in the Sydney 2000 Olympics Opening Ceremony.  In 2005, Margaret attended the Australasian Women and Policing Conference where NPYWC’s Domestic and Family Violence service received an award.  More recently Margaret has been instrumental in advocating and seeking an increase in Renal Dialysis machines in NPY Communities as well as seeking corporate sponsorship for Women’s Only Law and Culture meetings, driven through the Larapinta Extreme Trail fundraiser.

She is a member of the Uti Kulintjaku Team, a highly regarded group of women from the NPY region who develop resources to prevent the negative influence of trauma as well as improve wellness and mental health.

Margaret says that Women’s Council really makes a difference to people’s lives and we must never forget our greatest achievement in combating petrol sniffing.