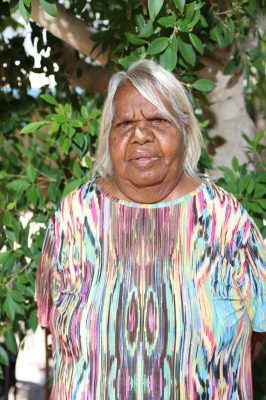 Julie was born around 1956, on Victory Downs Station, NT, on the south-western boundary.

She grew up on Victory Downs but also spent a lot of time walking the country on camels with her family. Julie started work as a domestic at Victory Downs for the station house and a housemaid for the motel in the days when Victory Downs was a stop-over for visitors to Uluru.

She moved to Finke in 1983 with her grandparents to join her mother in 1983. She worked in the shop, pricing, shelving, stacking, cleaning and selling tea, sugar and meat, and generally helping out. In 1985 she went to work at the school. She was the school janitor, and used to clean the school inside and out, gardening, and maintaining the school grounds and was eventually promoted to assistant teacher. She was an education worker and was also teaching assistant to the senior class. While teaching she continued cleaning, and so had two jobs. Julie was one of the longest-serving Anangu employees of the Department of Education. She worked at the school for 15 or 20 years until it was time to take long service leave and have a rest at home.

Julie has been very involved in community affairs. She was on Aputula Community Council for some years. She is very interested in community issues and community development, as well as support and advocacy for the people she also does interpreting.  She sees herself as an asset to the community and enjoys the opportunity of representing her region as a Director of the NPY Women’s Council as well as assisting and supporting NPY Women’s Council workers in her community.